How technology is changing the global remittance space in 2018?

The remittance industry is a big business, according to the latest figures published on the World Bank website, global remittances are expected to increase by 4.6% to $642 billion in 2018. Remittance inflows improved in all regions and the top remittance recipients were India with $69 billion, followed by China ($64 billion), the Philippines ($33 billion), Mexico ($31 billion),Nigeria ($22 billion), and Egypt ($20 billion). India had in 2016 received remittance of 62.7 billion.

Banks remainthe most expensive type of service provider, with an average cost of 10.57%.

In addition to the global average, a weighted average total cost is calculated, which accounts for the relative size of the flows in each remittance corridors. The global weighted average in Q1 2018 has remained stable, recorded at 5.23 percent. This marks the fourth consecutive quarterly decrease of this figure recorded at 5.65 percent in Q1 2017.

Anelectronic decentralized ledger would enable all participants in aninternational trade finance transaction ? the bank, the importer, and exporterto access data in real-time. Documentation and record of authenticableownership, along with the transfer of assets would be streamlined digitally, inreal-time, on a tamper-proof ledger. 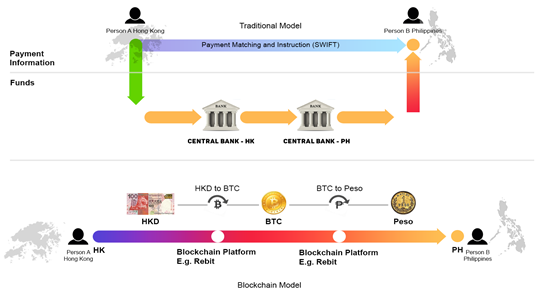 Blockchain-based settlements can reduce the friction of domestic and cross-border transfers between banks. Using the blockchain in this fashion will not only lead to morevalue accretion to remitting customers, but it will also be the kind of radical value proposition improvement that will be required to attract customers and break them from established habits around sending and receiving money.Similarly, the blockchain can be used in remittances to enhance pricing transparency and provide better transfer security, as well as be used as anon-ramp for other technology-driven financial services.