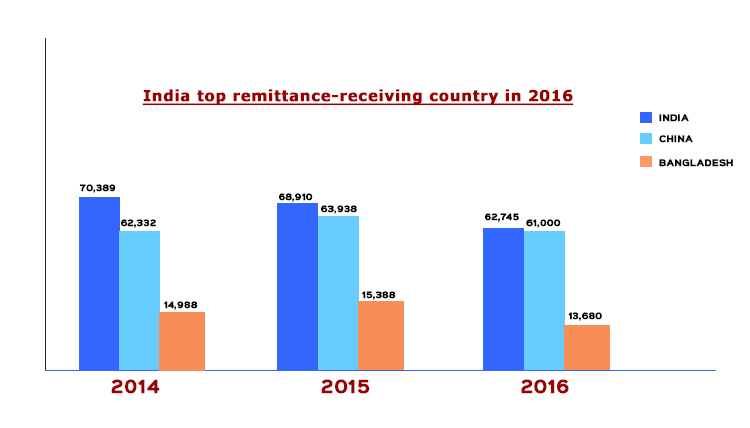 Remittance flows have grown over the last decade at a rate averaging 4.2 per cent annually, from $296 billion in 2007 to $445 billion in 2016. This dramatic increase in the amount of money migrants send home to their families in developing countries is helping to lift millions out of poverty and in attaining the 'Sustainable Development Goals' (SDG), the study said. About 40 percent of remittances are sent to the rural areas where majority of poor people live; adding that the money is spent on food, health care, better educational opportunities and improved housing and sanitation.

The IFAD report also claims that, more than 800 million family members are benefiting from the remittances by over 200 million migrant workers. Remittances are expected to remain a stable source of finance to meet the immediate needs and aspirations of millions of families around the world, the report mentioned.One very important factor in the report also points at the change of remittance flows, in the decade between 2007 and 2016, India surpassed China to become the top receiving country for remittances. In 2007, India was second behind China, with USD 37.2 billion in remittances as compared to USD 38.4 billion for China. Currently, about 200 million migrant workers support some 800 million family members globally. In 2017, an expected one-in-seven people globally will be involved in either sending or receiving more than USD 450 billion in remittances. Amount of money migrants send to their families in developing countries has risen by 51 per cent over the past decade - far greater than the 28 per cent increase in migration from these countries. This dramatic increase in the money migrants sent home to their families in developing countries is helping to lift millions out of poverty and in attaining the Sustainable Development Goals (SDG), the study said.

Migration flows and remittances are having large-scale impacts on the global economy and political landscape. Total migrant earnings are estimated at USD 3 trillion annually, approximately 85 per cent of which remains in the host countries. The report also recommended improving public policies and proposed partnerships with the private sector to reduce costs and create opportunities for migrants and their families to use their money more productively. As populations in developed countries continue to age, the demand for migrant labour is expected to keep growing in the coming years, However, remittances can help the families of migrants build a more secure future, making migration for young people more of a choice than a necessity, the report said.

Remittances continue to be an important component of the global economy, surpassing international aid. However, for a country like India, this growth in remittances could invite different challenges for millions of families that rely heavily on these flows. The report also adds, Indians are now the biggest immigrant group in foreign countries such as Singapore, UK, Australia, New Zealand, Canada, and the United States.